The Beauty of Cumberland Falls

I recently took a trip to the Big South Fork area of southern Kentucky.  On our second day there, we ventured to a slew of waterfalls, but ended up at Cumberland Falls and Eagle Falls in the late afternoon and early evening.  This was a trip that a good friend of mine, Bill Fultz, organized for a group of waterfall photographers from Ohio and West Virginia.  This was the first time for almost all of them to photograph a Kentucky waterfall.  The royal jewel of Kentucky waterfalls is of course the Niagara of the South, the Great Falls, Cumberland Falls.  So you can imagine my frustration with fellow Kentuckians on the incredible pollution of this waterfall.  Instead of this majestic waterfall looking like Bill's photo above, it looked like mine below. 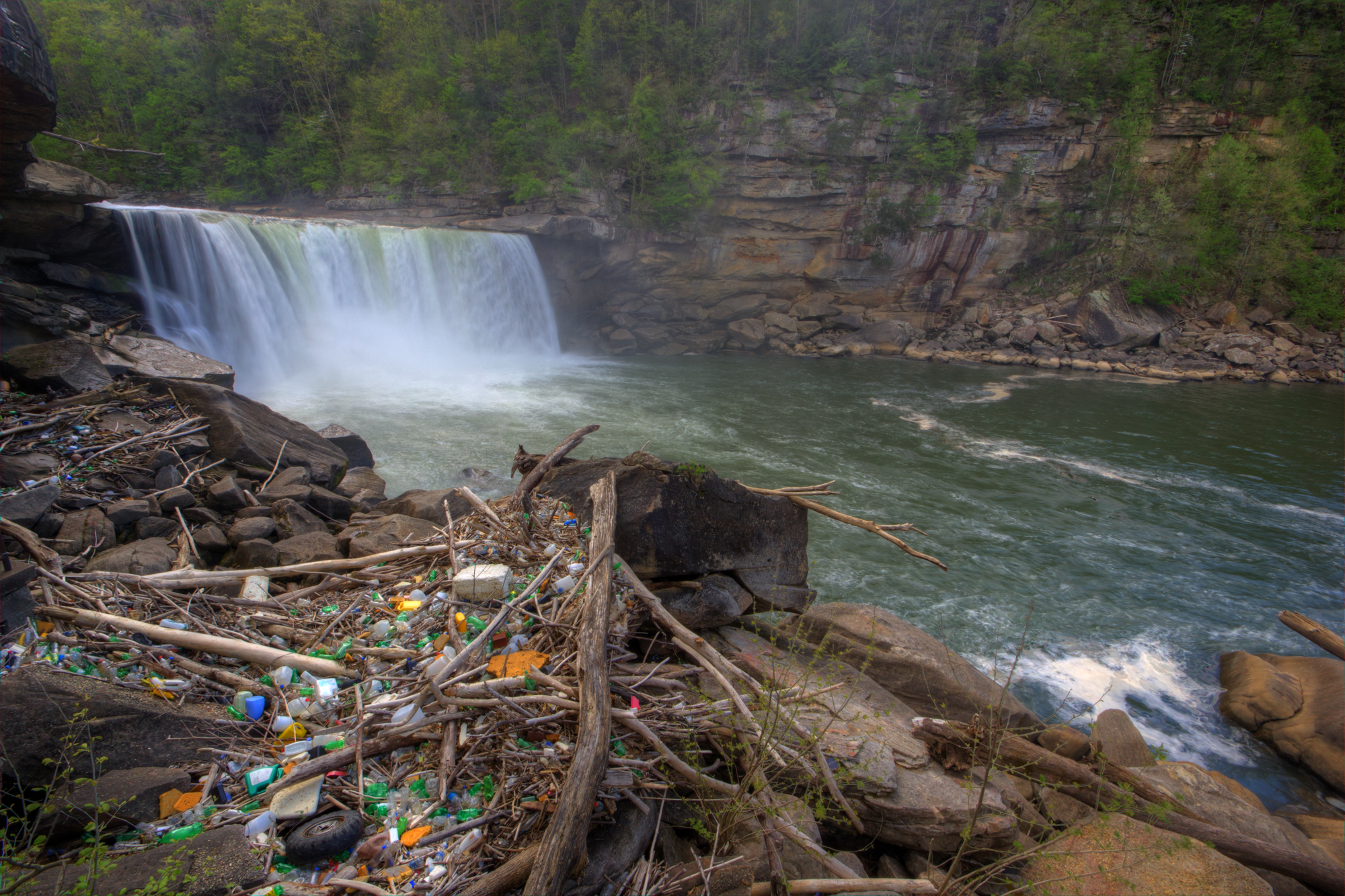 The pollution of Cumberland Falls

You might say to yourself, that is not pollution, that is just trash.  Alas, pollution is defined as "the introduction of contaminants into the natural environment that cause adverse changes."  There is a massive adverse change.  Instead of tourists coming to visit one of our greatest natural wonders, they come and get to see piles and piles of trash in front of the waterfall.  I personally have been to North Carolina and seen heroin needles in the water above a waterfall.  Talking to the nearby resident, it was clear that it was not an isolated case but something that flows downstream quite often.  I personally live along a state highway.  You would be embarrassed if you knew just how much trash us Kentuckians throw out our car windows.  Every single day I find or pick up trash that is located in my front yard.  I find fast food cups and bags that are from restaurants that I know are not located within 10 miles of my house.  Why do people refuse to wait until they are home to throw them away?  Why do we as a population have no thought on polluting our state with our discard?  Why is the penalty only $500 for throwing trash out a car window?  This is a problem of our neighboring states as well, as seen in this article about over 15,000 illegal dump sites in West Virginia.  Don't even get me started on the tens of thousands or cigarettes along my yard, and I have never had one in my life.

Instead here in Kentucky, we are allowing radioactive waste to be dumped illegally from neighboring state's production.  Makes you think, what do those states do to make it easier for the companies to just drive it illegally and illegally dump it in Kentucky?

Kentucky has such a problem with roadside dumping, that the state has cleaned up an average of 1,764 illegal dump sites per year since 1993.  That has cost us taxpayers over $57 million ("Once Upon a Place" by Kenneth D Tunnell).  To reference that amount of money, that would pay for the free two year college program vetoed just this week, for over 5 years.

So I decided to dive into this issue and see why is there such a massive problem in Kentucky.  I quickly discovered that only 83% of households in the state have trash collection services, leaving 17% that do not participate in trash collection (Green Eco Services).  They go on to state that Kentucky produces 17 million pounds of garbage daily.  That means 2.89 million pounds are produced by those without garbage collection DAILY!  That is 1,445 tons per day produced by those that do not participate in garbage collection.  Instead of finding a way to collect that trash at a cost that is sustainable to the largely poor population that does not participate or does not have access to garbage collection, we instead import mass amounts of garbage via trains from the east coast cities.  "Like Prisoners, trash shipments can be big business for states willing to accept them.  Kentucky, for example, has room for 212 million tons of waste.  At a going rate of $29 per ton, that's a $6 billion economic opportunity." (Slate)  The article also goes on to state that in the 23 years from 1986 to 2009, the number of landfills in the nation decreased by 75%.  That makes access to proper disposal harder and more expensive.

Kentucky ranked 50 or 50 or dead last in 2011 for the State Litter Scorecard.  In 2014 we moved up to 45th out of 50 states for the State Litter Scorecard.  We do have programs, like the Adopt-A-Highway program started in 1988 by the Kentucky Department of Transportation.  They have cleaned up 96,000 bags of litter over 200,000 volunteer hours  (Green Eco Services).  We also actively use low level prisoners to clean up roadside trash.  So the state is trying to attack the cleanup, as seen by the rise in the rankings, but what about the problem at its core?

Do we educate the populous about illegal dumping?  Not particularly, and this is a state that has 21% of people with 4 or more years of college, ranking 48th out of 50 states.  We are 44th for high school or higher education, with only 81.8%.  That is a part of the problem, but the people speeding by my house tossing out there trash, are driving their nice cars, heading to their new homes in sprawling subdivision, not to their hillside trailer in southeastern Kentucky.  The problem goes beyond just a socioeconomic issue.  The issue is multi-headed, being a problem with access to proper garbage disposal, the money to be able to afford a rising cost of garbage collection, uneducated about the problem and just pure laziness.

So who is at fault for the mass of trash at the base of Cumberland Falls? 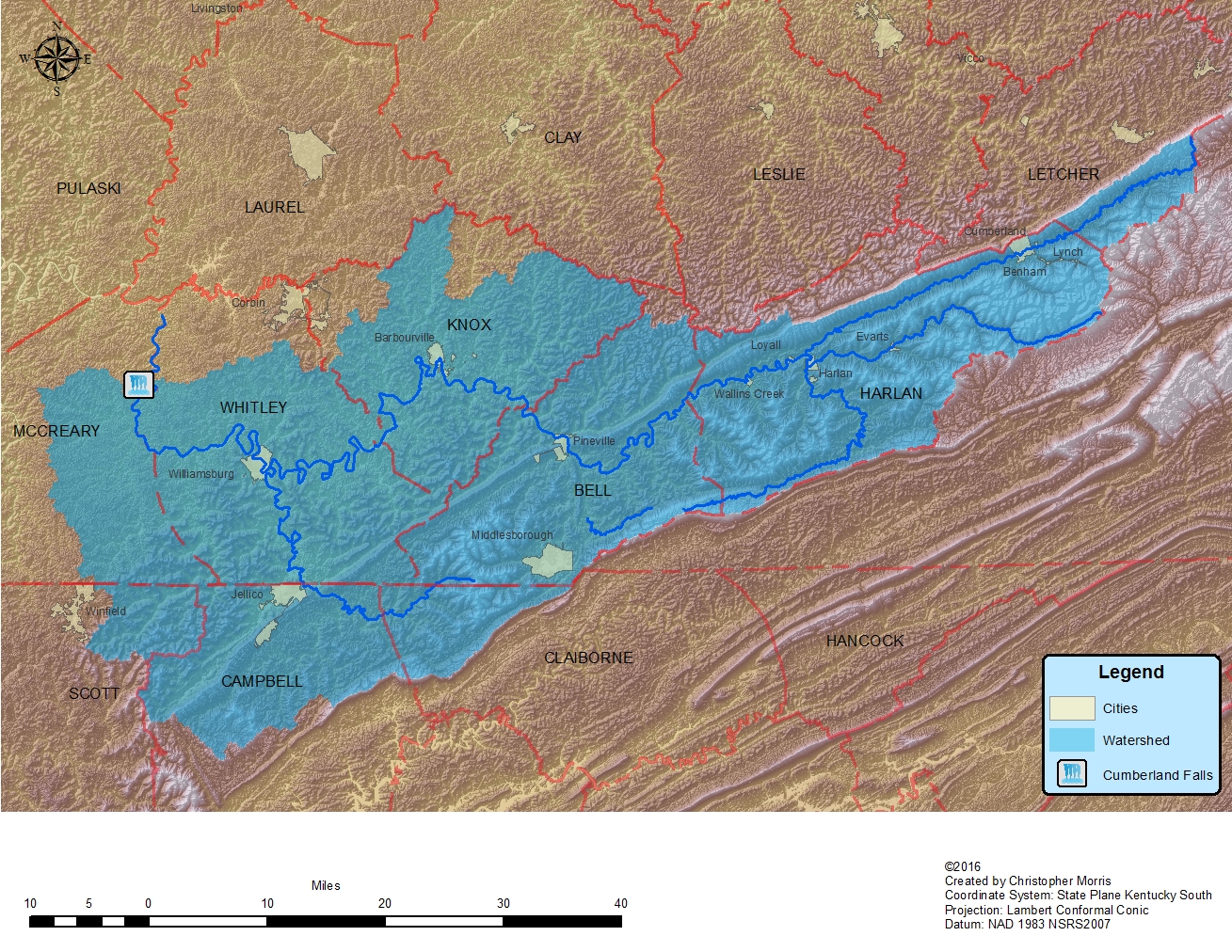 Visualization of the Watershed for Cumberland Falls

It starts in the headwaters of the Cumberland River, up the Poor Fork, near towns like Cumberland or Harlan.  In the mountains along Martin's Fork or near the gap in Middlesborough, the largest town in the watershed for the falls.  Citizens throwing trash out their window, a mere plastic bottle onto the hillside along a road.  The wind blows and sends the bottle further down the hill toward to hollar.  The rain carries it to a nearby creek that only takes it to a larger and larger stream, eventually making its way to a major fork of the Cumberland River.  A large rain event sends it flying down the Cumberland River, only to get lodged below the falls on rocks, high above the normal pool elevation.  Did that citizen of the Commonwealth think about the possibilities of what that bottle could do?  How long it could last out there in our waterways?  Or did they only think about how they did not want to put it in a garbage can and how it was easier to just roll the window down a bit and toss it out of THEIR sight, only to make it into the sight of the over 750,000 annual visitors to the falls?

It is not just those that live in the watershed though.  It is those that drive through it, on the 1000's of miles of state highways and interstates located in the watershed.  Just below Cumberland Falls, is the gorgeous Eagle Falls.  I was amazed at the trash there as well, that was from VISITORS, discarding their water bottles, too lazy to carry them out.  I left one in the picture below that someone discarded over the railing, not quite making it over the cliff to the river below.  WHY WHY WHY WHY WHY?

Illegal dumping is a massive problem in the state of Kentucky, one that we should think hard about solving.  I know no one at the Kentucky Derby this coming weekend is going to see the litter or the dumping of eastern Kentucky, but we need to waken up to the problem across the entire state, and protect more than whiskey and horses.  Whitley County, where the lodge and most of Cumberland Falls State Resort Park is located, brought in $101,511,590 in travel expenditures in 2014 (Kentucky Tourism).  So the falls is important, let's keep it and Kentucky clean.